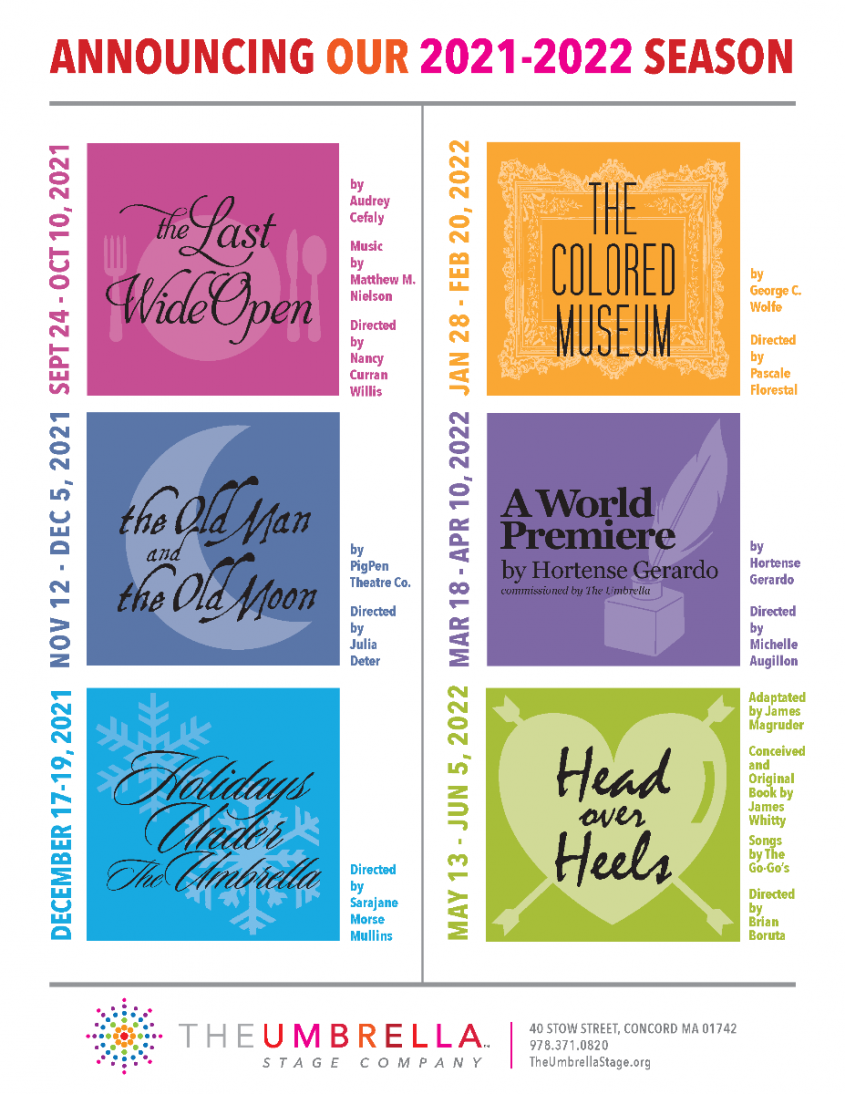 The Umbrella Stage Company returns in its 2021/2022 season with six fresh,
varied productions, including an original world premiere, staged in-person in its two recently constructed theaters at 40 Stow Street.

Halted by COVID-19 midway through its inaugural season as a professional company, the award-winning team led by Producing Artistic Director Brian Boruta has taken time this year to construct a thoughtful, balanced season to ease stage-starved audiences back into a theater experience for a tentative time.
Planning for limited capacity seating and Covid safety protocols, the season begins with an intimate staging of Audrey Cefaly’s romantic comedy, The Last Wide Open (Sep 24-Oct 10), and builds modestly from there – forgoing the large  casts of originally planned musical spectacles such as War Paint in favor of smaller, diverse and lesser known productions.

The lineup also includes: the music-rich and imaginative sea-faring epic The Old Man and The Old Moon; an updated, relevant new presentation of the satirical The Colored Museum; and the joyous musical comedy Head Over Heels, from the visionaries behind Hedwig and the Angry Inch and Avenue Q, fueled by music from the Go-Gos. Balancing out the season is an expanded
family friendly concert, Holidays Under The Umbrella, and an original play commission created by Hortense Gerardo and directed by Michelle Aguillon, who have partnered with The Umbrella on multiple pandemic projects.

NEW APPROACHES FOR A DIFFERENT KIND OF SEASON
With one exception, productions will be in The Umbrella’s new 344-seat proscenium-style mainstage at roughly half capacity to allow for optimal audience distancing from the cast and each other. The Umbrella joins a cohort of peer theaters in implementing heightened cleaning, mask mandates, fully vaccinated workplaces, and required proof of full vaccination or negative Covid test for adult attendees to protect community members.

Boruta cast the widest possible net to engage a diverse panel of Umbrella community members – performers, directors, designers, as well as board and staff members of all ages and backgrounds – to review, discuss and consult on selections that would feel meaningful, accessible and exciting to all its constituents just easing out of the pandemic.

Fate plays its hand in this romantic comedy that features original songs and live music. Lina, a young waitress, and Roberto, an Italian immigrant,  have been working together for years but rarely talk. If they
do, it’s from a distance or gets lost in translation. But when a late-  finds them alone in the restaurant at closing time, they find their lives intersecting in surprising and mystical ways. Over wine and conversation, they test the waters of happiness and intimacy. A love song in three movements, The Last  Wide Open imagines how the universe conspires to bring us together.

Play by PigPen Theater, Directed by Julia Deter
The Old Man has kept his post as the sole caretaker of the moon for as long as he (or his wife, the Old Woman) can remember. When she is drawn away by a mysterious melody sparking memories of their shared past, the Old Man must decide between duty (and routine) and love (and adventure). Luckily for audiences everywhere, he chooses the latter, and what follows is an imaginative sea-faring epic, encompassing apocalyptic storms, civil wars, leviathans of the deep, and cantankerous ghosts, as well as the fiercest obstacle of all: change.

Directed by Sarajane Morse Mullins
The Umbrella’s beloved holiday concert returns the mainstage after last season’s virtual presentation. Familiar faces and Umbrella Stage favorites will return to sing seasonal songs and share their own holiday memories in a family friendly concert to put everyone in the spirit of the season!

By George C. Wolfe, Directed by Pascale Florestal
Serving as an elaborate satire of the prominent themes and identities of African American culture, the play is set in a fictional museum where iconic African American figures are kept for public consumption.
Told in a series of eleven sketches, each segment centers on a different “exhibit” in the museum, and serves as a small one-person play or monologue. Exploring themes of racism, stereotypes, intracommunity conflicts in black culture, and the ongoing legacy of slavery and segregation, The Colored Museum received overwhelming critical praise for its provocative subject matter and in-depth
exploration of the African American theatrical and cultural past.

By Hortense Gerardo, Commissioned by The Umbrella, Directed by Michelle Aguillon
Local playwright Hortense Gerardo (Incantation) will create a brand new play specifically for The Umbrella Stage Company season. Stay tuned throughout the year for more information, sneak peeks, and special events leading up to this world premiere event

Adapted by James Magruder, Concept and Original Book by James Whitty, Music by The Go-Go’s,
Directed by Brian Boruta
Head Over Heels is the bold new musical comedy from the visionaries that rocked Broadway with Hedwig and the Angry Inch, Avenue Q and Spring Awakening. This laugh-out-loud love story is set to the
music of the iconic 1980’s all-female rock band The Go-Go’s, including the hit songs, “We Got the Beat,” “Our Lips Are Sealed,” “Vacation,” Belinda Carlisle’s “Heaven is a Place on Earth” and “Mad About You.”
A hilarious, exuberant celebration of love, it follows the escapades of a royal family on an outrageous journey to save their beloved kingdom from extinction—only to discover the key to their realm’s  within each of their own hearts.

Each year, The Umbrella Arts Center comes alive with festive holiday energy during Winter Market, which brings thousands of visitors to Concord during the first weekend of December. But for this extraordinary 2020 season, we’ve reimagined it as an opportunity to safely connect artisans, retail and hospitality businesses with holiday celebrants.

Instead of hosting a market at 40 Stow Street, “Winter Market Goes to Town” connects area businesses hosting Umbrella Artists to enliven four Concord retail districts with art. Downtown, the Depot, Nine Acre Corner, and West Concord will become a moveable festival of holiday arts, attracting shoppers and tourists from throughout the region — not just for a weekend, but throughout an extended holiday retail season!

Be sure to check out all of those on list (addresses list below) and see a glimpse of a few here: 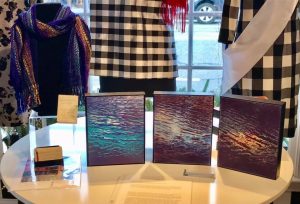 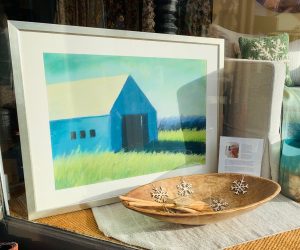 What a wonderful opportunity for our community to see & support the work of these gifted artists while also shopping local this holiday season to support our local shops. 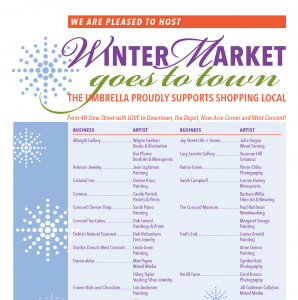 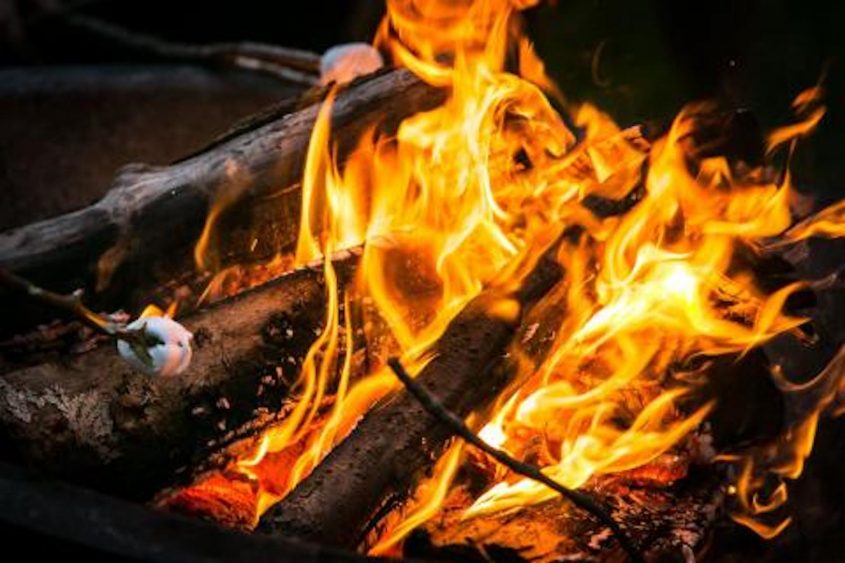 Many Celebrations this Winter Solstice

Flickering firelight illuminates small hands gluing, weaving, and cutting. Are these elves in the North Pole? Nope, these are the kids and families participating in this year’s Winter Solstice Celebration!

You may recall last year’s blow-out Solstice at the Old Manse. Families, friends, and strangers who became friends gathered around the fire pit singing carols like “Deck the Hall” and “O Tannenbaum.”  Voices of the Earth, the Arts & Environment chorus, lit hundreds of candles handed out to the crowd. Everyone heartily drank warm cider and roasted marshmallows on the fire. This year, you can guess, is slightly different. We won’t be at the Old Manse. But we still plan to celebrate the Solstice! Instead of gathering in one spot on one day, we’re celebrating over many days.

Ninjas in Nature is hosting a Winter Ninja Festival to enjoy the freedom of running around outside and the satisfaction of building your own fire. 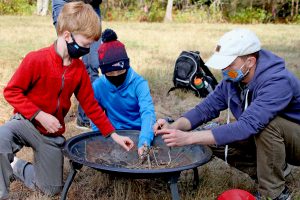 In our winter self-care workshop, gather what brings you warmth and joy during dark months and create reflective collage art before hibernating at home.

Finally, families can craft their own solstice ornaments at Concord Market. Glue, cut, and weave lily stem stars. Twist and tie fabric evergreen trees. Wrap cranberry wreaths to hang on the tree. Don’t forget to visit Concord Market and pick up some hot cocoa or cider to enjoy! 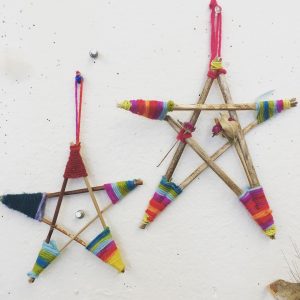 Join us around the community fire this Solstice for all these outdoor, winter workshops. To learn more about and sign up for our collection of Winter Solstice activities, visit the Arts & Environment class page. Who knows how you’ll light up this Winter Solstice! 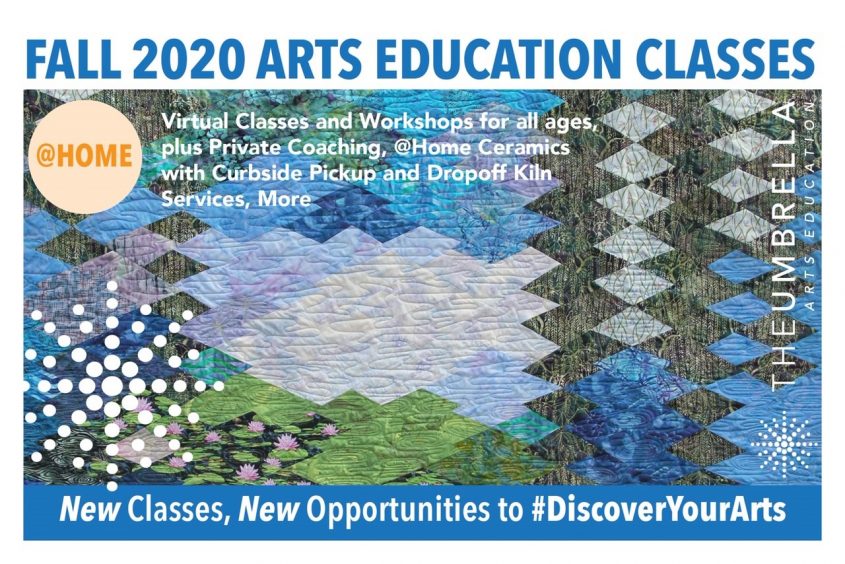 The Umbrella @ Home Offers Flexible Online Art Class Options
#StayHome #StaySafe #StayCreative – Since its spring closure due to COVID-19, The Umbrella Arts Center has directed its energies to transforming its expansive array of arts programs – from classes, summer camps and stage productions to gala events and public festivals — into virtual, asynchronous or social-distanced outdoors formats.

For this fall, instead of emphasizing a return to in-person classes, the organization has continued to invest in and refine The Umbrella @ Home offerings, delivering virtual arts education experiences through a variety of distance-learning methods and platforms.

To inspire its community to remain creative through the pandemic, the organization is also inviting all class participants, teachers and community artists share their favorite creations in a fall exhibition, #DiscoverYourArts Showcase.

Fall I session adult classes start as early as September 11. Explore and register for the variety of classes at TheUmbrellaArts.org/Classes or contact 978-371-0820 x204. 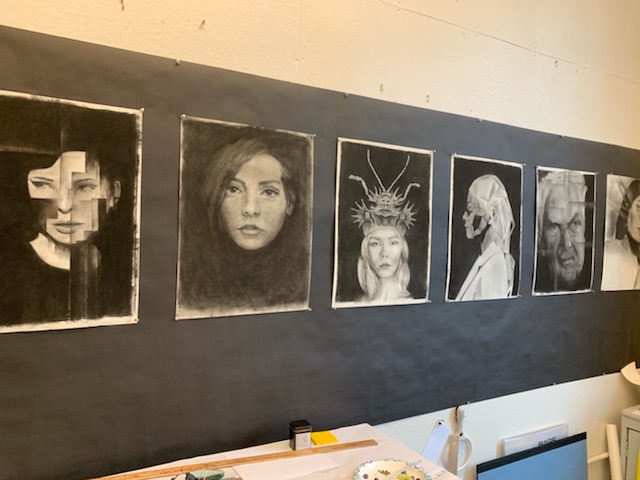 The Umbrella had its grand reopening this weekend in Concord MA.  It was amazing. If you weren’t able to make it, you need to stop in. The building is beautiful and The Umbrella is offering amazing opportunities for our community to enjoy the arts!

Here are some of the highlights from the Grand Reopening:

They had many activities throughout the afternoon. These included:

We were able to visit many of the studio artists. They were very welcoming and we loved looking at and hearing about their work.

If you brought your children, there were activities for all ages related to The Umbrella’s current exhibit in conjunction with the National Park Service. The Gallery contained an exhibition of works by Nicholas Mancini, the 2018-2019 Umbrella Artist in Residence. We were able to meet Jess Muise, the curator of the exhibit and Visual Arts Manager. We visited the box office where we could purchase tickets to Greater Boston’s Newest Professional Theater The Umbrella Stage Company and the upcoming Lyle Lovett Concert. And on our way out, Reasons to be Cheerful was serving ice cream in an ice cream truck, courtesy of the Umbrella. Great way to top off a great afternoon!

The Umbrella has A LOT of upcoming events so keep reading Living Concord’s weekly email so you don’t miss any of them!

If you want to mark your calendar here are some highlights:

And you can always Make a Night of It in Concord! The Umbrella would like you to make the most of your night out in the historic Concord Center Cultural District. Find special Dinner-and-a-Show and Hotel partner offers from Trail’s End Cafe, Adelita, Concord’s Colonial Inn, Best Western Concord, and more at TheUmbrellaArts.org/Partner-Offers.