The Concord Recreation Department has put together an incredible event.

Concord’s Holiday Tree Lighting and Parade is a tradition that brings our community together in a joyful way, and this year is no exception. The annual event is sure to delight with its festivities, including dozens of roadside attractions and a parade highlighted by Santa leading the tree lighting in Concord Center.

Bring the whole family for an evening of community fun and make sure to take in all that Concord has to offer during this magical time of year. Shop local to support our community and see what unique things our Town has to offer.

Entertainment will start at 3:00P throughout Concord Center and there will be a lot of it! Here are some highlights that you can put in your calendar:

The parade will begin at 4:50 and will walk along Stow, Hubbard, Walden and Main St. The tree lighting is at 5:15 in Monument Square and Santa will be taking photos from 5:30-7.

Our local businesses will be out on full display joining the holiday festivities. Here is a list of snacks, music, and raffles:

Looking forward to a wonderful holiday season. Thank you to the Concord Recreation Department and to all the local businesses for helping to light our local tree.

This year is the 25th anniversary of the Concord Education Fund. The fund was started so that our students’ teachers could provide new or enhanced curriculum to our students. Over the past 25 years, the Ed Fund has played a pivotal role in getting the following programs off the ground.  Many of these programs have now become such an integral and regular part of our student’s curriculum that we are not aware they were initiated by the Ed Fund, with the support of parents and local organizations. The Ed Fund is an all-volunteer board; its administrative overhead is 5% of our budget, so nearly all donations go right back to the students.  Selected grants include:

The list goes on and on. Go to our website where all our projects are listed, and some are explained in detail here: http://concordedfund.org/grant-highlights-archive/

Thank you for your past and future support. Most of our support comes directly from the parents; your money goes directly back to the students. The 25 year partnership between the Ed Fund and the teachers is a big reason why the Concord-Carlisle public schools are as great as they are.

Our 25th anniversary gala is Saturday, November 16. Laurie Hunter, the Superintendant will say a few words, and we will briefly update you on recent grants and initiatives.  Then we will celebrate with the 10-person band, Sugah Rush. Please come by purchasing tickets at http://concordedfund.org/25th-silver-anniversary-party/.

If you can’t come, but want to play a role in enhancing our students school experience, please donate. We would greatly appreciate it. 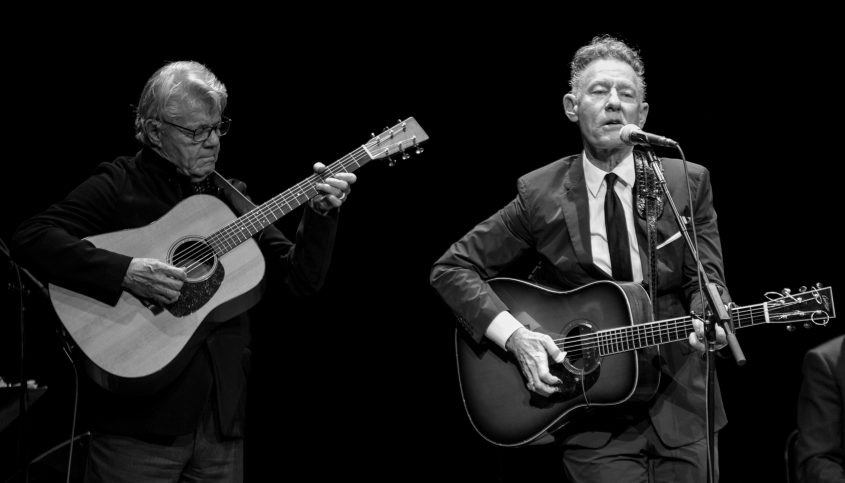 It came as no surprise when Lovett’s return to The Umbrella Concert Series was announced that tickets sold out within days.

“When Lyle first came to Concord in the spring of 2015, we told him of our plans for the new Umbrella,” recalled Liz Gross, concert committee chair and board member. “He said if we got it built, he would come back to open it for us.”

Lovett was true to his word. He even rearranged his schedule so that the day after he was inducted into the Austin City Limits Hall of Fame he could arrive in Concord to mesmerize the audience with soulful ballads and upbeat country hits. When rock legend Steve Miller was discovered in the sold-out crowd and invited to join Lovett on stage for an impromptu two-song jam—the first time the two had ever performed together—the energy in the new state-of-the-art theater was palpable.

Between songs, Lovett showed his appreciation for The Umbrella’s arts mission in the region, emphasizing the importance of accessible art, and recognized the importance of the concert date, Oct. 25, coinciding with the Massachusetts #ArtsMatterDay. He also spoke admiringly about the remarkable transformation of the venue (when he first visited, before significant construction began, the concert had been staged in a former school auditorium with uncomfortable wooden seats, cramped stage, and poor sightlines).

A New Venue for the Region

Excitement buzzed through the sold-out crowd during a pre-show reception in The Umbrella’s newly constructed atrium art gallery and art-filled halls. The mood was raised further still by the foot-stomping bluegrass ensemble The Ruta Beggars who opened for Lovett.

The evening was a joint milestone and fitting celebration for both the region’s arts scene and The Umbrella. The event celebrated the opening of the renovated Umbrella, including the naming of the new main stage theater, Theater144.  Liz Gross, chair of the capital campaign, received a standing ovation in recognition of her leadership.