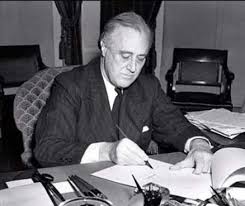 i.e. the generals and admirals through whom he exercised command

When we think about our country’s leading military men of WW2, the names Eisenhower, Nimitz, Bradley, Halsey, Patton, and MacArthur are likely to be foremost in out mind. Yet, although these men were key players in brining a victorious end to WW2, they were subordinate to four other men who are lesser known, and perhaps entirely unknown to the most recent generation of Americans. We will introduce the audience to these men, how each of them fit into Roosevelt’s chain of command, and how they got there.