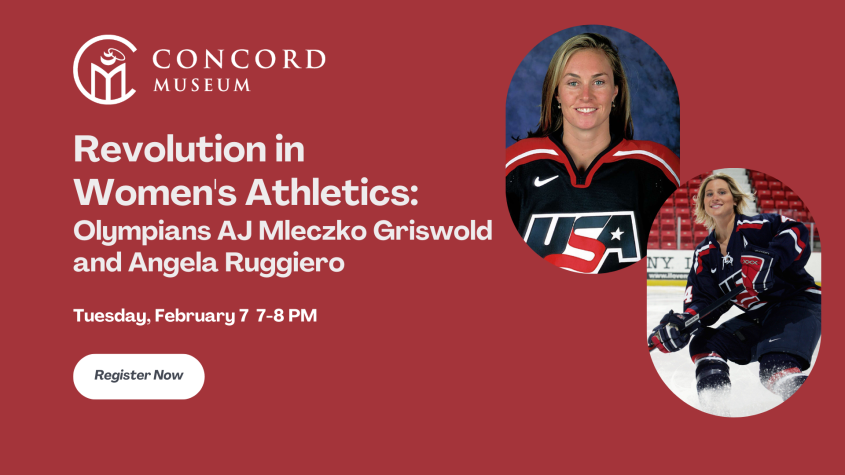 At the Concord Museum, history is both preserved through its extensive collection and “made new” through its engaging, interactive exhibitions and extensive public programming. We are proud to introduce the Rebels and Revolutionaries speaker series, which seeks to emphasize the Museum’s dedication to the spirit of revolution through individuals making history in the present, in ways large and small.

To launch Rebels and Revolutionaries, Olympians AJ Mleczko Griswold and Angela Ruggiero will discuss their experiences as elite athletes, the journey from the locker room to the board room, and the odds-defying leadership and perseverance that led to outstanding careers on the ice and beyond.

AJ Mleczko Griswold is an Olympic gold medalist ice hockey player and commentator on ESPN. She was inducted into the New England Women’s Hall of Fame; received the second Patty Kazmaier Award, awarded annually to the best female college ice hockey player in the United States; and, while working for NBC, was the first woman to commentate for an NHL playoff game.

Four-time Olympian, gold medalist, and hall-of-famer, Angela Ruggiero is a former ice hockey player once named the best player in the world by The Hockey News and US Olympic Committee’s Player of the Year. She is currently the CEO and co-founder of Sports Innovation Lab, a technology-powered firm leading the sports industry.

Following the program, a limited group will join the speakers for a wine and cheese reception. Tickets to the reception are limited; reserve early.

Co-sponsored by the Concord Contemporaries, a dynamic group of Museum enthusiasts, supporters, and advocates, ages 30 – 60.