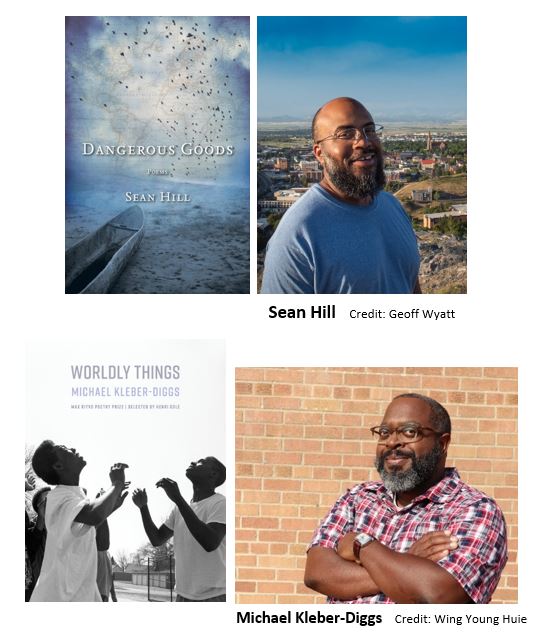 Concord Virtual Poetry at the Library Series presents Poetry of Black Lives in America: Sean Hill and Michael Kleber-Diggs on Sunday, March 6 at 3:00 pm, via Zoom. Please register for the Zoom link.

Join renowned poets Sean Hill and Michael Kleber-Diggs who will read from their luminous, moving poetry on Black experiences in America, with home and family at its heart and visions for a nation in balance. A Q & A period follows.

Born and raised in Milledgeville, Georgia, Sean Hill is the author of Dangerous Goods, awarded the Minnesota Book Award in Poetry, (Milkweed Editions, 2014) and Blood Ties & Brown Liquor, named one of the Ten Books All Georgians Should Read in 2015 by the Georgia Center for the Book, (UGA Press, 2008).

From the poet whose stunning debut was praised as “transcendent” by Kevin Young, Dangerous Goods tracks its speaker throughout North America and abroad, illuminating the ways in which home and place may inhabit one another comfortably or uncomfortably, or both simultaneously. From the Bahamas, London, and Cairo, to Bemidji, Minnesota, and Milledgeville, Georgia, Hill interweaves the contemporary with the historical, and explores with urgency the relationship between travel, migration, alienation, and home. Here, playful “postcard” poems addressed to Nostalgia and My Third Crush Today sit alongside powerful reflections on the immigration of African Americans to Liberia during and after the era of slavery.

Hill has received numerous awards including fellowships from the Cave Canem Foundation, the Minnesota State Arts Board, The MacDowell Colony, the University of Wisconsin, Stanford University, and the National Endowment for the Arts.

Hill’s poems and essays have appeared in Callaloo, Harvard Review, New England Review, Orion, Oxford American, Poetry, Terrain.org, Tin House, and numerous other journals, and in almost two dozen anthologies including Black Nature and Villanelles. His poems have also been featured as part of the Academy of American Poets’ Poem-a-Day series and on The Slowdown podcast hosted by Tracy K. Smith.

Hill has taught at several universities, including the University of Alaska – Fairbanks and Georgia Southern University. Hill has also served as the director of the Minnesota Northwoods Writers Conference at Bemidji State University since 2012. He lives in Montana with his family and is currently a Visiting Professor of Creative Writing at the University of Montana.

In these poems, Kleber-Diggs names delight in the same breath as loss. With uncompromising candor, he documents the many ways America systemically fails those who call it home while also calling upon our collective potential for something better. “All of us want,” after all, “our share of light, and just enough rainfall.”

“I am captivated, consoled, and bowled over by these poems, knifelike in their concision and oracular at their core,” notes Tracy K. Smith.

Among other places, Kleber-Diggs’ writing has appeared or is forthcoming in Poem-a-Day, Poetry Daily, Great River Review, Poetry Northwest, Potomac Review, Hunger Mountain, Memorious, and in several anthologies of essays. He has been a Fellow with the Givens Foundation for African American Literature, winner of the Loft Mentor Series in Poetry, and the former Poet Laureate of Anoka County libraries. His work has been nominated for a Pushcart Prize and Best of the Net.

Since 2016, Kleber-Diggs has been an instructor with the Minnesota Prison Writing Workshop. He also teaches Creative Writing in Augsburg University’s low-residence MFA program and at Saint Paul Conservatory for Performing Artists. He is married to Karen Kleber-Diggs, a tropical horticulturist and orchid specialist. Together, they have a daughter who is pursuing a BFA in Dance Performance at SUNY Purchase.

This event is sponsored by The Friends of the Concord Free Public Library.