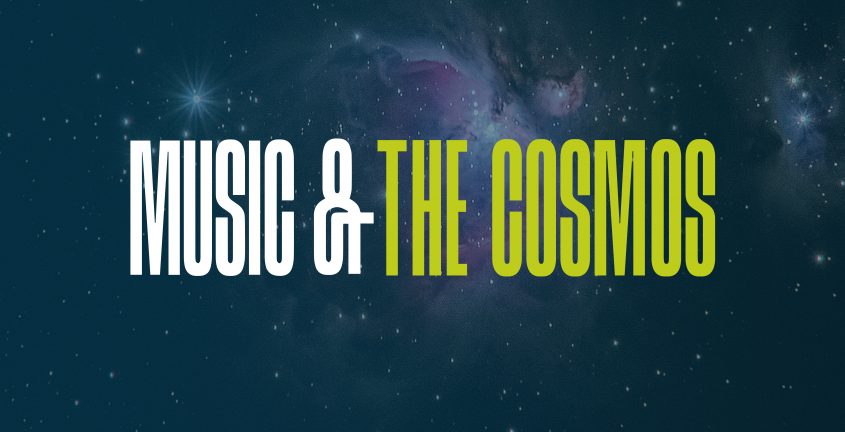 For centuries, composers have found inspiration in the vastness of the universe. The intersection of music with the cosmos challenges our conventional thinking of what music can be, where it can occur, how it is constructed, and how it can connect us to nature. Explore the intersection of music and space and delight in a chamber music concert performed by the talented Concord Conservatory of Music faculty. Join us on Friday, October 21st, at 7:30 for Music & The Cosmos.

The evening will feature presentations by guest speakers, Observational Astrophysicist Erin Kara of the MIT Kavli Institute and Brad Wells of the Grammy Award-winning Roomful of Teeth and Williams College Lecturer. We’ll learn about the sonification of black holes and the concept of space, and its relationship to sound.

Guest speaker, MIT Assistant Professor of Physics Erin Kara, is an observational astrophysicist working to understand the physics behind how black holes grow and affect their environments. She has advanced a new technique called X-ray reverberation mapping, which allows astronomers to map the gas falling onto black holes and measure the effects of strongly curved spacetime close to the event horizon. She also works on a variety of transient phenomena, such as tidal disruption events and Galactic black hole outbursts. She is a NASA Participating Scientist for XRISM Observatory, a joint JAXA / NASA X-ray spectroscopy mission, and co-chairs the supermassive black hole working group. Her work in the field of space is extensive, and she also works to develop new and future space missions.

Guest speaker and musician Brad Wells is the Founder and Artistic Director of the Grammy Award-winning new music vocal group Roomful of Teeth. He has led the ensemble in premieres of works by many of today’s leading composers, including Caroline Shaw, Terry Riley, and Sarah Kirkland Snider. This new music “vocal band,” praised by WQXR as “the future of vocal music,” performs regularly in festivals, on concert stages, and in educational residencies around the world. He has composed and arranged vocal and instrumental works that have been performed throughout the U.S. and Europe. Since 1999 Wells has been Artist in Residence in Vocal Music at Williams College. He has lectured and published articles on the physiology and acoustics of non-classical vocal styles and the role of singing in film.

General Admission tickets are $25. Kids under 18 are FREE. Purchase tickets in advance from ConcordConservatory.org or at the door.
Email info@concordconservatory.org or call (978) 369-0010 to learn more about CCM. Concord Conservatory of Music is the area’s non-profit community music school located at 1317 Main Street in the West Concord Union Church.

About CCM
Concord Conservatory of Music is an energetic community of people who are passionate about music education. CCM enrolls more than 400 students annually and offers programs for all ages and abilities. As a non-profit school, CCM serves Concord, MA, and 15 surrounding communities. Its curriculum includes private instruction, group classes, and performance opportunities. Financial assistance is available.