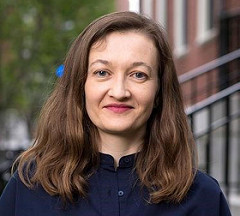 Jana Prikryl reads from her first collection The After Party: Poems and talks about her practice, followed by book signings and light refreshments.

She works as a senior editor at the New York Review of Books, where her essays on photography and film are frequently published, as well as in The Nation.

Her poems have appeared in magazines including Harper’s, the London Review of Books, the New Yorker, and the Paris Review. Born in Czechoslovakia and raised in Canada, she has an English degree from the University of Toronto and an MA in cultural criticism from New York University. During 2017-18, she is a Radcliffe Institute Fellow, focusing on ekphrastic poems and on poems that reckon with the histories embedded in and excluded from images.

A free event sponsored by The Friends of the Library