The Concord Orchestra presents “Into the Woods” 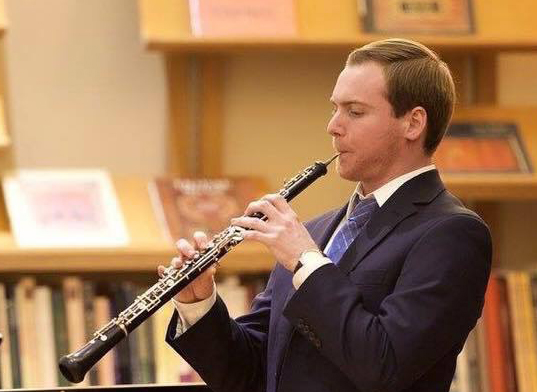 Alex Kinmonth, performs Ludwig August Lebrun’s Concerto No. 1 in D minor, a rarely heard classical oboe concerto. Alex was appointed principal oboe of the Detroit Symphony Orchestra at the age of 21. He earned his Bachelor’s degree from The Juilliard School, where he studied with Nathan Hughes of the Metropolitan Opera and graduated with the Peter Mennin Prize for Outstanding Achievement and Leadership in Music.

He can be heard on the DSO’s most recent “Live from Orchestra Hall” recordings of the Brahms Symphonies and Tchaikovsky’s Symphonies 1, 2, 4, and 6. Since his appointment with the DSO, he has been an active participant in many musical groups, performing with the Detroit Chamber Soloists of Detroit and the Detroit Chamber Winds and Strings, leading orchestra sectionals for local orchestras, and holding master classes for area high school students. In late February, he will be guest assistant principal oboe with the New York Philharmonic.

Mr. Kinmonth has substituted in the Metropolitan Opera on both oboe and English horn and in the Charleston (SC) Symphony Orchestra. During recent summers, Alex has participated in the Mainly Mozart Festival in San Diego, CA and the Sun Valley Summer Symphony in Idaho. In previous summers he has attended the Tanglewood Music Festival, Music Academy of the West, the Round Top Institute, and the Aspen Festival, where he received a fellowship in 2014. He also participated in the prestigious New York String Orchestra Seminar at Carnegie Hall in 2013. Alex is a winner of the Professional Musicians Club of Boston’s award for “Outstanding Achievement.” During his time in New York, Alex performed operas, orchestral works, and new music with the Juilliard Orchestra and New Juilliard Ensemble, working with noted conductors such as James Levine, Kurt Masur, and Jaap Van Zweden.

Alex grew up in a musical household in Carlisle, choosing to play violin at age 5 and oboe at age 9. His former teachers include John Ferrillo and Laura Ahlbeck.