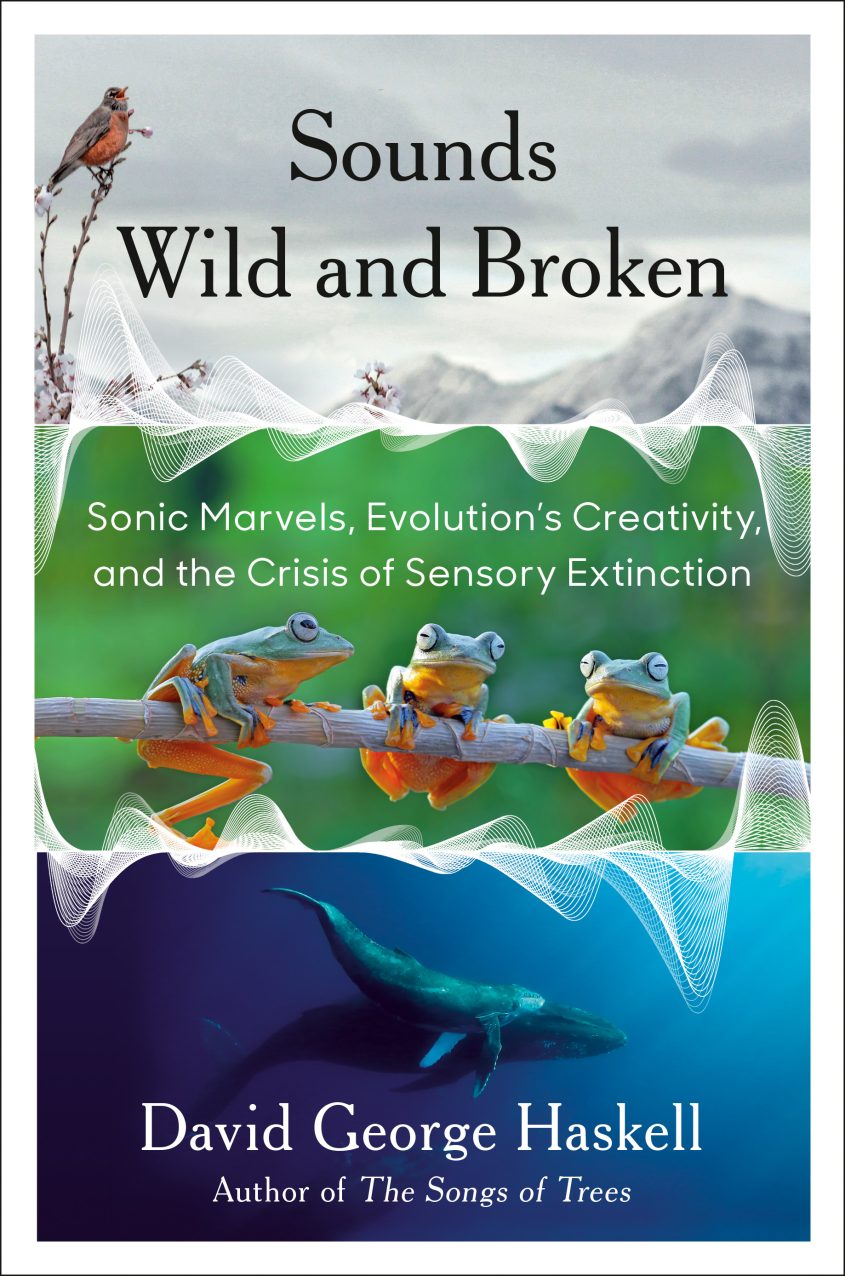 Sounds Wild and Broken is an invitation to listen, wonder, belong, and act.

We live on a planet alive with song, music, and speech. David Haskell explores how these wonders came to be. In rain forests shimmering with insect sound and swamps pulsing with frog calls we learn about evolution’s creative powers. From birds in the Rocky Mountains and on the streets of Paris, we discover how animals learn their songs and adapt to new environments. Below the waves, we hear our kinship to beings as different as snapping shrimp, toadfish, and whales. In the startlingly divergent sonic vibes of the animals of different continents, we experience the legacies of plate tectonics, the deep history of animal groups and their movements around the world, and the quirks of aesthetic evolution.Starting with the origins of animal song and traversing the whole arc of Earth history, Haskell illuminates and celebrates the emergence of the varied sounds of our world. In this program David Haskell discusses his book Sounds Wild and Broken. He is joined in conversation by Harvard biologist Scott Edwards.

DAVID HASKELL is a writer and a biologist. His latest book, Sounds Wild and Broken, explores the story of sound on Earth and is an Editor’s Choice at the New York Times. His previous books, The Forest Unseen and The Songs of Trees are acclaimed for their integration of science, poetry, and rich attention to the living world. Among their honors include the National Academies’ Best Book Award, John Burroughs Medal, finalist for Pulitzer Prize, Iris Book Award, Reed Environmental Writing Award, National Outdoor Book Award for Natural History Literature, and runner-up for the PEN E. O. Wilson Literary Science Writing Award. Haskell received his BA from the University of Oxford and PhD from Cornell University. He is a Fellow of the Linnean Society of London, a Guggenheim Fellow, and William R. Kenan Jr. Professor at the University of the South in Sewanee, TN, USA. Find him at dghaskell.com

SCOTT EDWARDS is Alexander Agassiz Professor of Zoology and Curator of Ornithology in the Museum of Comparative Zoology at Harvard University. He came to Harvard in December 2003 after serving as a faculty for 9 years in the Zoology Department and the Burke Museum at the University of Washington, Seattle. His research focuses on diverse aspects of avian biology, including evolutionary history and biogeography, disease ecology, population genetics and comparative genomics. He has conducted fieldwork in phylogeography in Australia since 1987 and conducted some of the first phylogeographic analyses based on DNA sequencing. He did a postdoctoral fellowship in immunogenetics at the University of Florida and gained experience with studying the major histocompatibility complex (MHC) of birds, an important gene complex for interactions of birds and infectious diseases, pathogens and mate choice. An important system for studying these issues is the ongoing epizootic involving House Finches (Haemorhous mexicanus) and the bacterial pathogen Mycoplasma gallisepticum. His work on the MHC led him to study the large-scale structure of the avian genome and informed his current interest in using comparative genomics to study the genetic basis of phenotypic innovation in birds. In the last 10 years Dr. Edwards has helped develop novel methods for estimating phylogenetic trees from multilocus DNA sequence data. His recent work uses comparative genomics in diverse contexts to study macroevolutionary patterns in birds, including the origin of feathers and the evolution of flightlessness.

From 2013-2015 Scott served as Division Director of the Division of Biological Infrastructure at the US National Science Foundation, where he oversaw a staff of 22, an annual research budget of $120M (USD), and managed funding programs focused on undergraduate research, postdoctoral fellowships, natural history collections and field stations, and cyber- and other infrastructure for all areas of biology, from molecular to ecosystem science. He has served as President of three international scientific societies based in the US: the Society for the Study of Evolution, the Society of Systematic Biologists, and the American Genetic Association, each of which publishes a scientific journal and has memberships ranging from 500 – 2500 scientists and students. He has served on the National Geographic’s Committee for Research and Exploration, the Senior Advisory Boards of the NSF-funded US National Evolutionary Synthesis Center (NESCent) and the National Institute for Mathematical and Biological Synthesis (NIMBioS), and on the Advisory Boards of the National Museum of Natural History at the Smithsonian and the Cornell Lab of Ornithology. He oversees a program funded by the National Science Foundation to increase the diversity of undergraduates in evolutionary biology and biodiversity science. He is a member of the American Academy of Arts and Sciences (2009), a Fellow of the American Association of the Advancement of Science (2009), and a member the National Academy of Sciences (2015).