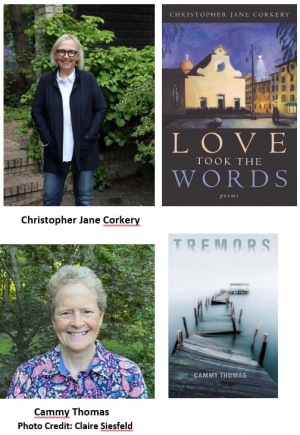 Join us for an afternoon of powerful and moving poetry with Christopher Jane Corkery and Cammy Thomas who will read from and discuss their latest work.

“Love took the words right out of my mouth.” So begins the first line of Christopher Jane Corkery’s poignant and unforgettable new collection of poems, Love Took the Words (Slant Books, 2020). Throughout the work these two themes—the power and mystery of language, especially the crafted one of poetry, and what Keats called “the holiness of the heart’s affections”—intertwine, accumulating a rich panoply of associations and meanings. The occasions for Corkery’s poems are often domestic: the thrill of youthful romance, of marriage and family, of children inventing new worlds. Yet here also are a poet’s acts, psychological and spiritual, in a life which, like every reader’s life, contains plenty and its absence all at once.

Corkery’s first book, Blessing, appeared in 1985 from Princeton in the Princeton Series of Contemporary Poetry. She published widely in journals throughout the 90s and 2000s while raising a family in Concord with her husband—teacher, editor, and literary agent Tom Hart (1944-2012). The winner of a Pushcart Prize, she has received fellowships from the Ingram Merrill Foundation, the St. Botolph Club Foundation, and the MA Artists Foundation. She has been a grateful fellow at Yaddo and the MacDowell Colony.

She spent most of her teaching life in the English Department at Holy Cross in Worcester, where she taught critical reading and writing, as well as courses in creative writing.

The poet Linda Bamber has said that Corkery’s poems “balance on the knife’s edge between light and dark.” Corkery is at work on a third volume begun at the American Academy in Rome where she was a visiting artist in early 2020, just before the pandemic was realized to be the killer it would become.

Part of Corkery’s childhood was spent in Europe where her father worked in the establishment of the International Refugee Organization, the precursor to the UN’s Refugee Relief Administration (UNRAA). She went to high school in Mexico City, college in New York, and graduate school at Trinity College Dublin.

In addition to being a poet and parent and grandparent, Corkery is a devoted sculler and has competed in the Head of the Charles numerous times. She lives in Cambridge.

Cammy Thomas reads from her latest collection, Tremors (Four Way Books, September, 2021), whose short, musical poems make stops in the terrains of childhood, difficult and somewhat violent; middle life, with parents breaking down and children moving away into their own lives; and later life when memory falters but passion does not. The poet Alan Shapiro calls these poems “a coherent, insightful, and very moving arc from the wrong beginnings of a childhood marked by privilege and abuse, whose traumatic dependencies were/are only partly tempered by ambivalent love and belated understanding, to a complex, mature and at times visionary grasp of the intricacies and inextricabilities of beauty and loss, desire and separation, without either side of the equation diminishing the power (for good or ill) of the other. The artistry of the poems is part and parcel of the maturity of the poet.”

A fellowship from the Ragdale Foundation helped Cammy complete her second book, Inscriptions. All three of her books are published by Four Way Books. Her poems have recently appeared in Image, Poetry Porch, Amsterdam Quarterly, Gravel, and Compose, and in the anthology, Poems in the Aftermath (Indolent Books).

Two of her poems will be used as text in Far Past War, a choral work by her sister, composer Augusta Read Thomas, which will be performed by the Cathedral Choral Society at the National Cathedral in Washington DC, March 13, 2022.

After growing up on Long Island, Cammy was educated primarily in California, receiving her BA and PhD from the University of California, Berkeley, and her MA from San Francisco State University. She wrote her PhD dissertation on the poetry of Alfred, Lord Tennyson. An MFA followed, from the MFA Program for Writers at Warren Wilson College. She has taught literature and creative writing for many years, including at Concord Academy. She lives in Lexington, Massachusetts.

Sponsored by Friends of the Concord Free Public Library.

Concord Friends of the Public Library