André Gregory (“My Dinner with André”) in conversation with Michael Frederick 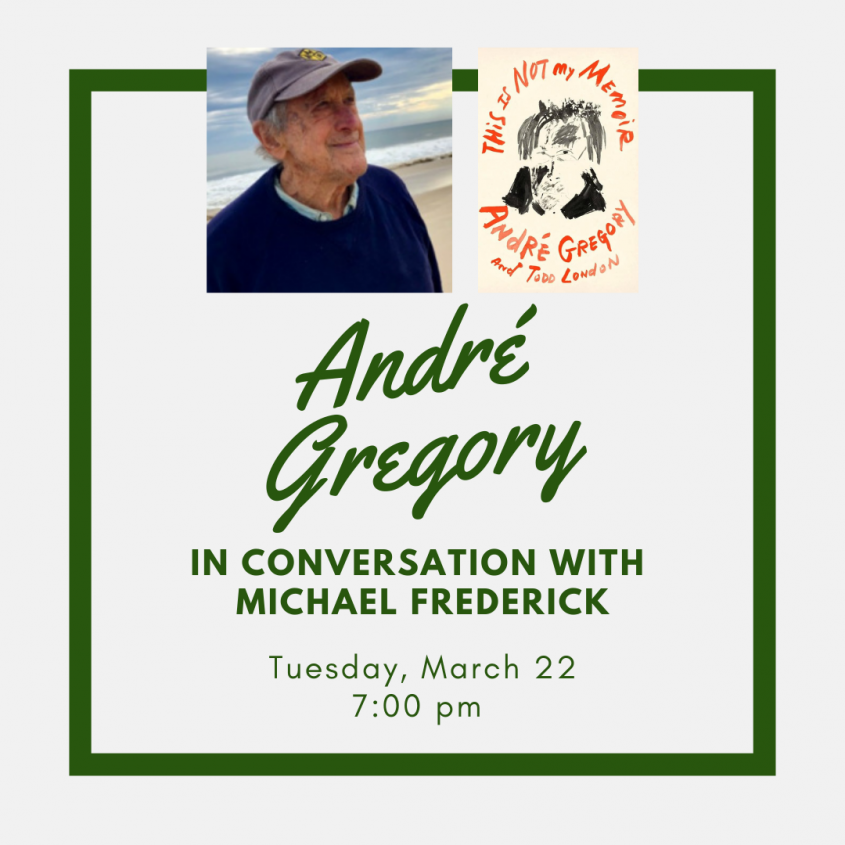 “I WAS THIRTY-THREE and couldn’t get a job as a dogcatcher. As if flaming out of three theaters and provoking Gregory Peck to slug me weren’t bad enough, I had accepted a job to direct a play about bestiality on Broadway. Leda Had a Little Swan was, to my knowledge, the first play in Broadway history to close the night before it opened. It also sealed my reputation as a lunatic…”

This is Not My Memoir is the life story of the iconic director, writer, actor, and co-creator of My Dinner With André. Taking the form of a wondrous fever dream, this autobiography-of-sorts presents fantastic and fantastical recollections from the director who changed theater forever with his Manhattan Project, who once drove a fire truck onto the stage in the middle of an opening night, and who has been willingly buried alive.

The book takes the reader from pre-war Europe to golden-age Hollywood, from avant-garde New York to monasteries in India. Throughout, André reflects on the role of the artist in society, and also shares the personal and spiritual struggles that brought him past the edge of despair. André Gregory, as he sees himself, is a man who has lived for art but who only recently learned how to love.

This Is Not My Memoir is a collaboration between Gregory and writer Todd London, who create a portrait of an experimental artist confronting his later years. What does it mean to create art in a world that often places little value in the process of creating it? And what does it mean to confront the process of aging when your greatest work of art may well be your own life?

ANDRÉ GREGORY has been one of the most important forces in the American theatre for nearly forty years. Gregory was one of the original creators of the regional theatre movement, the off-Broadway movement in New York, and with his partner Wallace Shawn, the American independent film movement.

He headed the Inner-City Cultural Center, a theatre in Watts founded right after the Watts riots to bring theatre to underprivileged teenagers. He was co-creator of the Seattle Repertory Theatre and Artistic Director of the Philadelphia Theatre of the Living Arts, where his productions included Galileo, Poor Bitos, Beclch, and Endgame.

His production of The Blacks ran for years in New York and featured now legendary performers James Earl Jones, Cicely Tyson, Lou Gossett and Maya Angelou. His production of Alice in Wonderland played for seven years, as well as touring the U.S., Europe, and the Mideast, and was made into a book in collaboration with photographer Richard Avedon.

His forty-year collaboration with Wallace Shawn began with his critically acclaimed production of Shawn’s Our Late Night, at Joseph Papp’s Public Theater. Shawn and Gregory went on to create My Dinner With André, directed by Louis Malle. The partnership of Shawn, Malle and Gregory later created Vanya on 42nd Street. In 2000, Gregory directed Shawn’s play, The Designated Mourner, in an abandoned men’s club in Lower Manhattan. His most recent production of Endgame — over the years he’s done three – was performed in an unfinished Donald Judd building in the middle of the Marfa Texas desert in 2005. In 2009 he directed Grasses of a Thousand Colors, also by Shawn, at the Royal Court Theatre in London. In the summer of 2013, Gregory directed two Shawn plays at the Public Theater – Grasses of a Thousand Colors and The Designated Mourner. In 2011, he directed Shawn’s adaptation of Ibsen’s Master Builder Solness, which he had rehearsed on and off for 14 years. This production was released as a film, A Master Builder, directed by Jonathan Demme. It opened at Film Forum in New York City in 2014, and theatrically around the U.S. Criterion has released a boxed set that includes My Dinner With André, Vanya on 42nd Street and A Master Builder.

My Dinner with Andre

As an actor, Gregory has performed in a dozen films, including The Last Temptation of Christ by Martin Scorsese, Mosquito Coast by Peter Weir and Celebrity by Woody Allen. So far, he has been the only character to ever kill Harrison Ford. Gregory starred in the HBO series The Young Pope directed by Paolo Sorrentino in 2017.

He wrote a play called Bone Songs written in verse that he performed at Redcat in Los Angeles and at the 92nd Street Y in New York in 2006.

Always breaking new ground, Gregory is now a visual artist and has had two shows; one a group show and the other, a one-person show, at the Jason McCoy Gallery in New York City. Gregory has also had two shows in Provincetown, Massachusetts. He is scheduled for a show this spring at Monica King Contemporary Gallery.

THIS IS NOT MY MEMOIR is Gregory’s latest project, written in collaboration with Todd London. It is published by Farrar, Straus and Giroux.

ANDRÉ GREGORY is a director, an impresario, a painter, a storyteller, maybe a fabulist, and always an artist. THIS IS NOT MY MEMOIR reveals Andre’s sublime talent, his ability to look, to really see, and ultimately just be. My experiences with Andre profoundly shaped my growth as an actor; reading this book is a reminder of the urgency of seeking yourself in your life and your art.
— JULIANNE MOORE

André Gregory’s art has always rested on a unique mix of avant-garde audacity and aristocratic charm, not to mention anecdotal flair. All of those elements are irresistibly on display in what is not his autobiography.
— ADAM GOPNIK